Early on in the design of manned reentry vehicles it was realised that the huge heat and strain of reentry would destroy any protuberances such as wings, rudders etc.  This lead to the minimal design of spheres and cones: 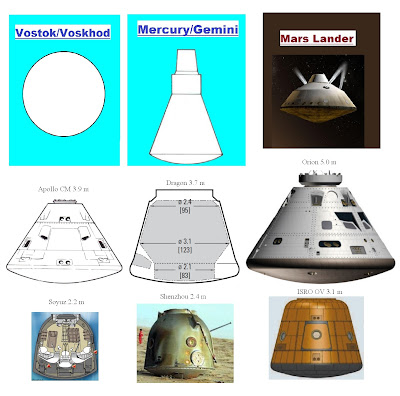 Reentry capsules of the space program

The truncated cone shape of the Apollo reentry capsule is suitable for withstanding the heat and pressure of reentry.  But by getting rid of all wings, rudders and other flight control surfaces, as well as any consideration for streamlining, the vehicle would have become unstable and unflyable. 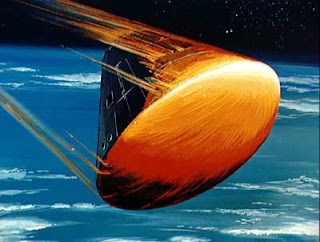 The manned reentry vehicles used in the space program were drop and forget -- they weren't meant to be piloted.  There were controls, and they could be piloted in theory, and aircraft pilots were used to crew these spacecraft, but the astronauts were rarely called upon to do so.  One notable exception is when Neil Armstrong famously took manual control of the LEM in order to avoid a crater moments before the first moon landing in the Sea of Tranquility.

The first manned reentry vehicle, the Vostok, was a sphere.  The thing to note about a sphere is that it's the least controllable of all the shapes you could have for an aircraft.

Such a vehicle would tumble and roll out of control.  All the wrong surfaces, like the windows, would be exposed to the great heat experienced in the direction of travel.  How could it be guaranteed that the heat shield would face downward during reentry? 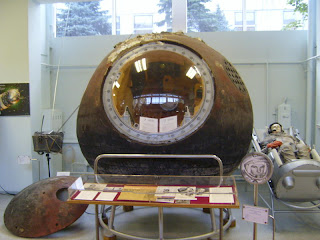 Vostok reentry capsule of Yuri Gagarin.  For display purposes the hatch covers are replaced by perspex.  One of the hatch covers is on the bottom left.  Note how thin this hatch cover is -- not very good protection from the heat.

You couldn't control it even if you wanted to because the Vostok had no controls.  The sphere was supposed to be self-stabilising in flight due to the strategic placement of the centre of gravity; that was meant to keep it pointing in one direction.

According to Prof. James Schombert of Oregon University:

The spherical design itself was ingenious - it has no maneuvering engines to orient it, since it is like a ball with the heavy weight concentrated at one end - if you throw it in the air (or re-enter the atmosphere with it ) it will automatically swing around with the heavy end downward.

True, the air would damp the rotation slightly and there would be a very slight tendency for the heavy side of the ball to point down.  But the other aerodynamic forces on the ball pulling strongly on the craft as it raced through the air would easily overwhelm this centre-of-gravity stabilising force.

The ball would tumble and roll out of control.  Even if you concentrated a million tons near one part of the inner walls, the craft would still oscillate wildly about that centre of gravity.

Changing the position of the centre of gravity within a vehicle is not a very effective way of stabilising the vehicle, especially in all three dimensions.  Only aerodynamic controls, interacting with air on the outside of the aircraft, can effectively stabilise a vehicle in flight. 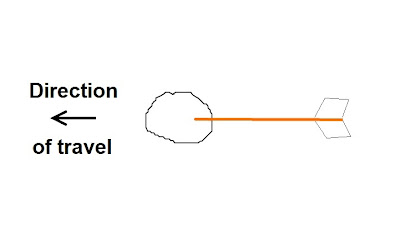 The above amorphous blob, stick and two airfoils would be a better design for an aircraft than the typical space reentry capsule.  This amorphous blob design was not actually adopted mainly because the stick (or equivalent airfoil) would burn up or be ripped off.  So the designers did away with the stick and airfoils and just left the blob.

Now, you can make that blob any shape you like: a ball, a cone, a bell -- it doesn't matter, without the stick and two airfoils (or something similar) it can't be stabilised.

This level of turbulence would be unacceptable for any other airplane.

Supposedly Apollo and other reentry craft could be controlled manually, but these air control surfaces, rockets and so on, were placed away from the heat shield in the conical aft section in which there would be huge turbulence and eddy currents of air that would render any such control surfaces unusable.

Maybe we should put wings on this cone, would that make it work? 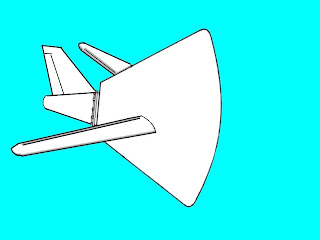 Normally this cone would be a ridiculous shape for an aircraft, but NASA says that it works great at super high speeds, even without the wings or any other control surface. And as a bonus it keeps the front of the aircraft really cool!

Now for a quick review of the general aerodynamic shape of all space reentry vehicles used to date.  Note that the Space Shuttle is the only aircraft that had a cockpit with forward-facing windows and all the normal controls of an aircraft cockpit: 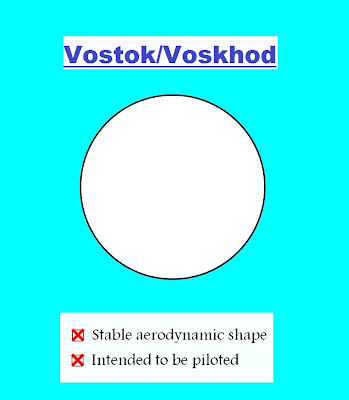 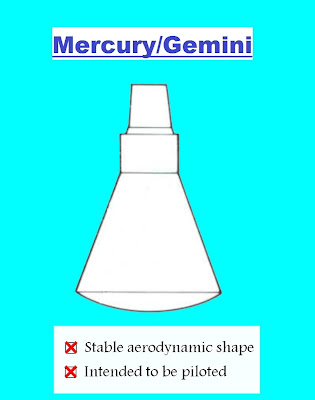 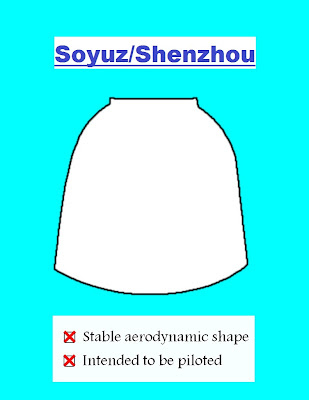 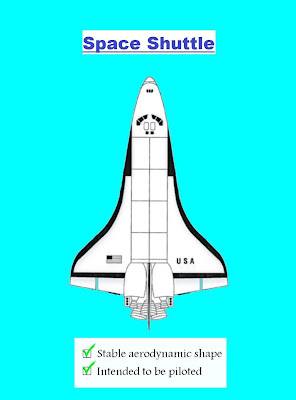 No matter whether the aircraft control was manual or automatic, every reentry vehicle of the capsule type from the Mercury to the Soyuz would tumble and roll and expose all the wrong surfaces to the hot underside in the direction of travel.

Apollo reentry capsule.  The conical aft section was made of aluminium which has a melting point of 660C. By some accounts, the heat of reentry was 2,760 - 5,500C -- the aluminium would melt!

There are no videos of one of these capsules re-entering earth's atmosphere. The Soyuz has supposedly been dropped to earth over a hundred times.  They could easily take a video from inside the capsule looking out on the way down, but there's no such video evidence. The only images are from after the parachutes are deployed.

When the Soyuz lands in Kazakhstan the press are kept well back (you could argue for safety reasons).  There's never any video or pictures of these moments just after landing, which is strange seeing as most people at least have a mobile phone with a camera to record such events. 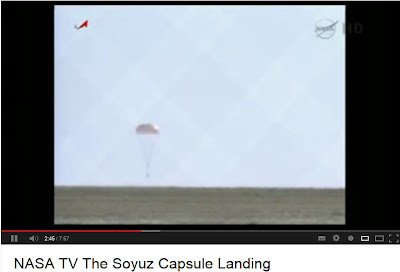 The capsule lands, then there's a flurry of activity and helicopters move in and all kinds of stuff happens that we can't see. 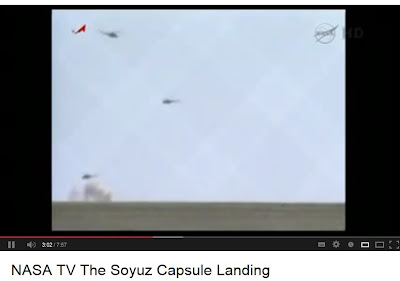 Then after they have done what they had to do -- out of sight of prying eyes -- there they are: the astronauts, who are obviously cold after their death defying plunge into the earth's atmosphere and need blankets urgently. 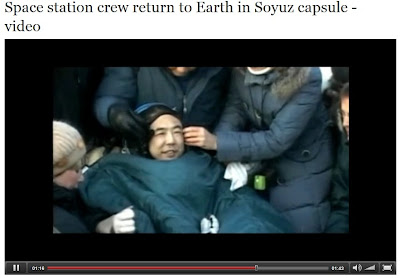 "Thanks for the blanket, space is really cold." 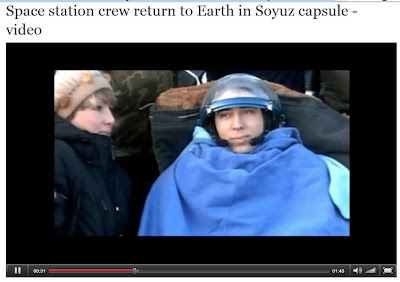 "Hah, the stuff people believe.  Thanks for this blanket." 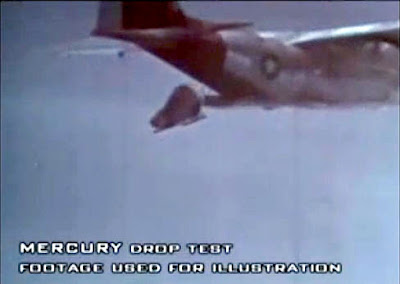