(Update 3/9/2013: Please note I've updated my view of the detached shock wave since first writing this post.  I now accept that there is a detached shock wave in the sense of a bow shock, but it is not detached in the thermal sense, as claimed by NASA. More in part 5.)

Most meteoroids burn up almost immediately on entering earth's atmosphere.  The few larger ones that make it to the ground lose 95 - 99% of their mass.  The air around them gets so hot it disassociates to become plasma.  95% of the glowing streak of a meteor is hot air, not hot rock.  According to NASA the temperature of the leading face of ICBMs returning from space is "hotter than the surface of the sun", (5500C+).

In order to spare space reentry vehicles from burning up like a meteoroid, NASA came up with the idea of cooling by ablation and the detached shock wave.  To get this shock wave you need a blunt leading edge.

Usually when designing aircraft you want to make it as streamlined as possible.  This allows for faster, cooler, more stable flight.  But when it comes to an object that is moving particularly fast you can forget the finesse of aerodynamics, what you need is brute force.

Rather than smooth contoured edges, you want to make it as un-aerodynamic as possible so that there's such a severe shock wave it detaches from the front of the vehicle. 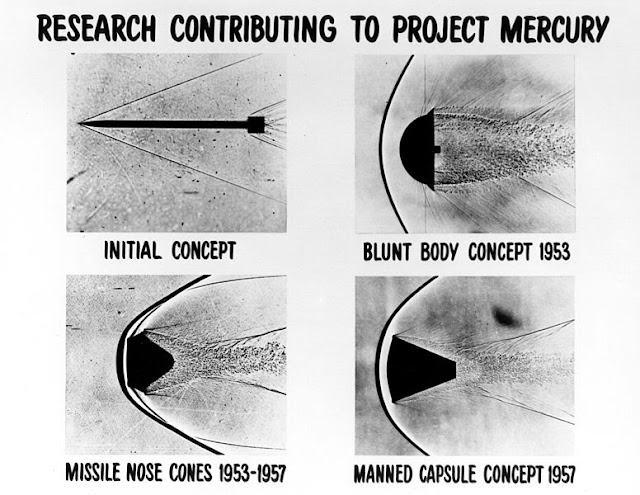 The beauty of this detached shock wave is that it conveys all the mechanical drag of friction to the vehicle with none of the heat.

The detached shock wave is found only in the space program in reentry vehicles -- it exists nowhere else in aerodynamics.  In all other subsonic and supersonic vehicles the shock wave is attached, and the faster they move the hotter the tip, or any leading edge, becomes.

Even the streamlined tips of ordinary aerial vehicles will have a null point somewhere where the air is stagnant, but even there the shock wave is never detached. 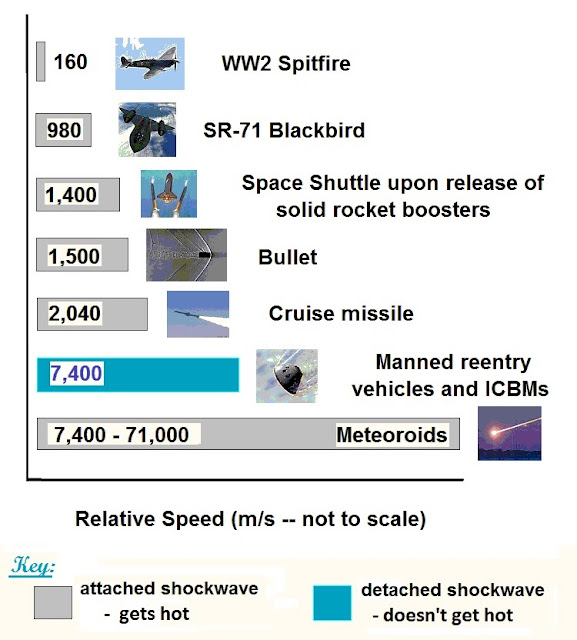 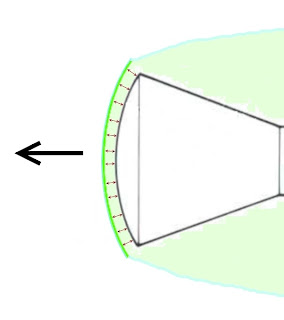 All the mechanical drag with none of the heat: the detached shock wave of reentry vehicles is the only example in physics of heatless friction.

Normally when an object breaks the sound barrier a shock wave is created that emanates out at the speed of sound.  The shock wave is necessarily anchored to the leading edge of the aircraft, it is not something that can take on a life of its own and go out in front of the craft and be detached. 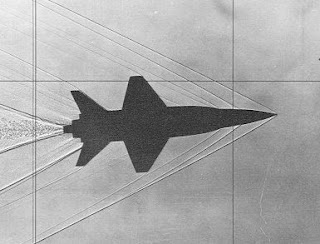 Consider the case of meteoroids: where is their protective detached shock wave of air?  Meteoroids come in all shapes and sizes including those bigger and those smaller than manned reentry capsules.  They are made of differing amounts of rock and iron.  They come in all different speeds including those much faster than reentry capsules and those about the same speed.  Yet all are severely burned.

You might argue that the reentry capsule is made of special ablative material.  Well meteoroids ablate too.  It all ablates.  Rock, metal, carbon and phenolic all get hot, melt and boil.

It's true that different materials have different heats of fusion and vaporisation, and that carbon has very high latent heat with both phase changes and so is a good choice for an ablative heat shield. 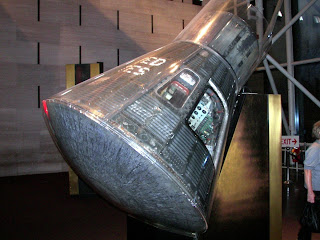 The Mercury heat shield consisted of phenolic resin encased in fibreglass.  Phenolic is rich in carbon and so is potentially a good material for a heat shield. 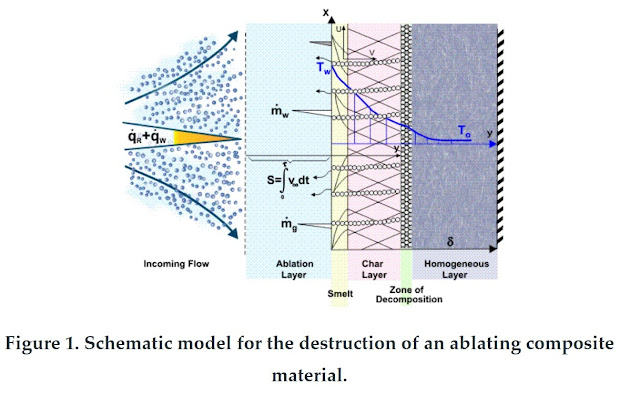 In the above diagram the hardened phenolic is the right-hand layer.  The middle layer is where the phenolic chars to become like amorphous carbon.  On the left is the ablation layer that is fluid, yet mysteriously doesn't get blown away by the rapidly moving air.

Such a stagnant layer of ablation air is unlikely, but the middle carbon layer is just as unlikely because amorphous carbon has no physical strength and would also be pulled away by the fast moving air.

The carbon was supposed to be reinforced by glass fibres that held it together while it ablated.  But glass has a melting point (1500C - 2100C) which is lower than the reentry temperature (even by this more conservative estimate of 2760C).

So, as soon as the phenolic charred and lost its physical strength, the glass reinforcing fibres would melt, the amorphous carbon would fly away unboiled and unmelted, and the heat shield would fail. 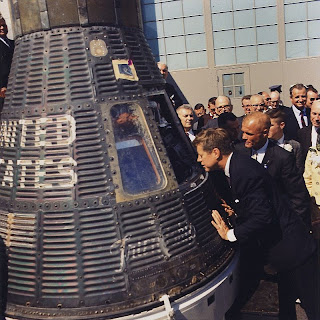 President Kennedy and John Glenn inspecting the Mercury.  Can you believe this flimsy tin can withstood the rigours of reentry?

Integral to the whole idea of cooling by ablation and a detached shock wave is the stagnation point. According to the theory, because the leading surface is flat and blunt, there is a layer of fluid material that doesn't move with respect to the surface, but hangs around to do insulating and cooling work.

If you take a big flat surface and blow a fan on it the air will flow over every point of the surface except for the central point where the air will be stagnant. 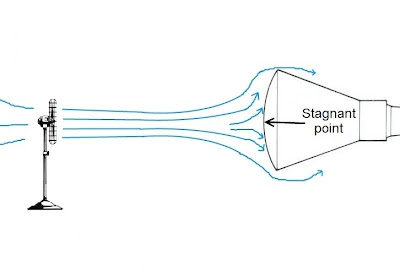 The theory goes that because the air is moving really, really fast suddenly the stagnant point covers the whole surface instead of just the central point. (Update 2/9/2013: It's kind of like that because the air is projected in the direction of travel, but actually I couldn't find a reference to back that up, so I'll back away from that particular claim, of the stagnation point covering the whole surface.)

Normally, when you increase the speed of something moving through the air, the air moves faster and the leading edge becomes hotter.  Except in the space program the situation is reversed -- air starts slowing near the surface and heat decreases!

And what if the air really were stagnant next to the base, then what is slowing the craft down? In regards to its ability to slow the craft down, the detached shock wave has all the properties of a super strong solid, but in terms of heat conduction it is more like a complete vacuum.  Truly amazing space age technology!

Ablation has a few meanings in various contexts meaning the removal of material. Like the detached shock wave, the heat-shield type of cooling ablation has no private industry application and is only found in the space industry on reentry vehicles.  (Rarely used on rocket nozzle liners too.)

It's hard to see how, under such extreme forces, liquid material can hang around to boil as well.  But, giving the benefit of the doubt, the tables below analyse both the above cases for melting and melting/boiling. 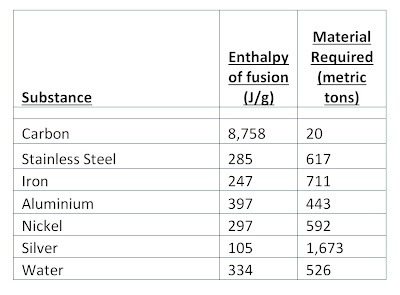 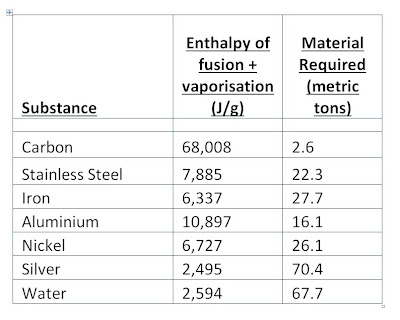 You can see that best case scenario, assuming the shield was 100% carbon that melted and simultaneously boiled perfectly, you'd still need twice the material that was actually in the heat shield.  (Shield weight = 1,360kg, material required = 2,600kg.)

Yet according to internet commenter rbroome:

"The heat shields I have seen at the Smithsonian appear to be in remarkably good shape."

Space reentry capsules are made of materials that cannot withstand the heat of reentry both in terms of the material's melting point and its energy dissipation capabilities via a phase change. To overcome this hurdle NASA invented the fictitious mechanism of the detached shock wave.

In reality, every manned reentry vehicle of the capsule type would have burned to a cinder upon reentry to earth's atmosphere.

The Space Shuttle is the only possible exception to this, as it uses neither ablation nor the detached shock wave for cooling, but reenters earth's atmosphere at a much shallower angle with lower temperature.