Denier land: Climate justice for all

So far I have 27 views on it.  Not long before it reaches the 17,000 views of my first video...
It's also interesting to note that until recently my comments were automatically approved on WUWT, now they're back to pre-moderation only. (Perhaps it's the thread. Moderated only on "Tips and Tricks"?)

(Update 15 Feb 2014. No, my WUWT comments are still auto-approved. Seems you need approval always for comments on the static pages, such as "Tips and Tricks")
Read more »
Posted by Paul Clark at 07:02 No comments: Links to this post

Email ThisBlogThis!Share to TwitterShare to FacebookShare to Pinterest
Labels: satire

Is it a product of education? I'm 39 years old and I'm guessing almost every warmist is younger than me...sounds like it anyway. I voted Green when I was young too.
I guess today's generation had the hyper-left wing indoctrination in school, particularly about climate change.
I imagine these comments are copyright NBC, but by linking to the article it should get me out of trouble. Here's the article:
http://investigations.nbcnews.com/_news/2013/12/16/21911592-climate-change-experts-fraud-was-crime-of-massive-proportion-say-feds?threadId=3893793&commentId=81053462#c81053462
Here's the comment from StrengthInNumbers (a suitably Hitler Youth style of name); I couldn't think of a comment that was more wrong, and out of touch with reality. (Click image to enlarge and scroll through images.) 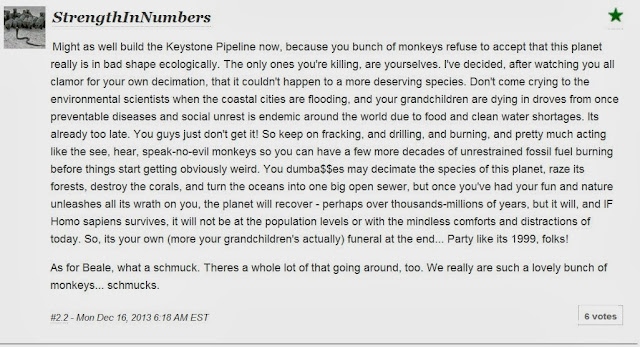 Update 2: Damn, Tamino critiques my post and wins, forces humiliating retraction from me (you can clearly see I've put a question mark at the end of the title now).  I now admit I don't know if the trendline by "ThingsBreak" was a case of wishful thinking or not. I suspected it was, but after reading Tamino's post I'm not so sure.  More below.

Update 3: Turns out this Tamino guy has authored a book on statistics. He proved I was out of my depth on the trendline issue, and suitably damaged my claim of a bogus one. Well done Tamino.

I tried to make an honest recontruction of that trend line; unfortunatley my only tool was Excel 2007 and the functions in it are limited.

I've read several of Tamino's posts over the years and been generally disappointed with them; also had my comments not approved by moderation. This particular post was quite good, though, and educational for me.

This is curious. A new Greg Laden article on ScienceBlogs.com:
How to not look like an idiot
..where Laden argues cold doesn't mean lack of global warming, has an odd graph in it.  Look at the red trendline:
Read more »
Posted by Paul Clark at 01:30 43 comments: Links to this post

A warmist links to insurance claims to prove AGW

I still like to argue with warmists on the internet, even though it's becoming more apparent that we're speaking two different languages.
Warmists like to claim the scientific high ground, saying things like: there's a 97% consensus, or "climate change is real and happening now!". But it's apparent that the science doesn't really matter to warmists.
A good example of this is in this latest Huffington post article:
Sorry Climate Change Skeptics: Arctic Melting Trend Continues Despite Milder Year 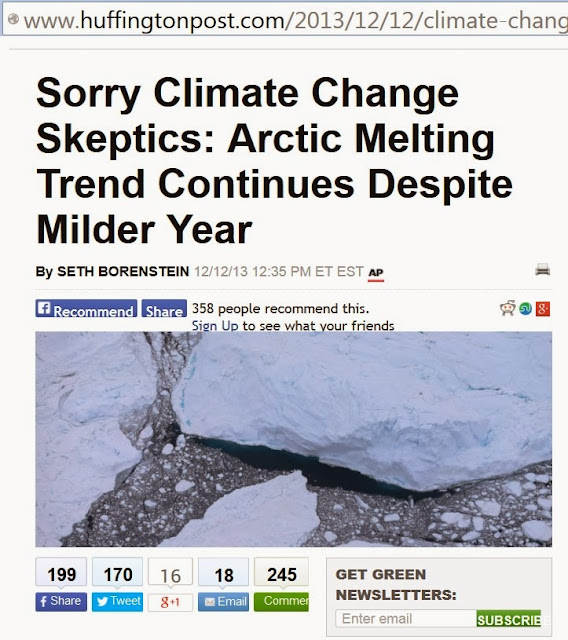 When any and all climate data can be interpreted as AGW, as in the above article, then it's not science that's being done, but a confidence trick.
One thing I've seen from warmists is confusing CO with CO2. Both come out of a car exhaust, but only one kills you. This is from "Demetris G", in the comments section of the above article. I like the first rebuttal from "Robert W".
Read more »
Posted by Paul Clark at 22:08 No comments: Links to this post

Again CO2 is confused with real pollution in a comment by a warmist.
Now, according to the convoluted AGW theory, CO2 is pollution because it causes dangerous warming. But there's no direct harm of CO2 on humans or animals -- even the IPCC would admit to that. But as usual a warmist lives in his own fantasy and is quite happy making up any old claptrap, no matter how unscientific. He claims CO2:
"..harms the health of citizens.."


Wow. The whole quote from Phillip Givens is below, from this Forbes article. It's the last comment of the article at the moment on page 40 of the comments. (Screen shot).
Read more »
Posted by Paul Clark at 00:00 1 comment: Links to this post

My video that went viral!

I address the criticism.

I only advertised it once with a single tweet: 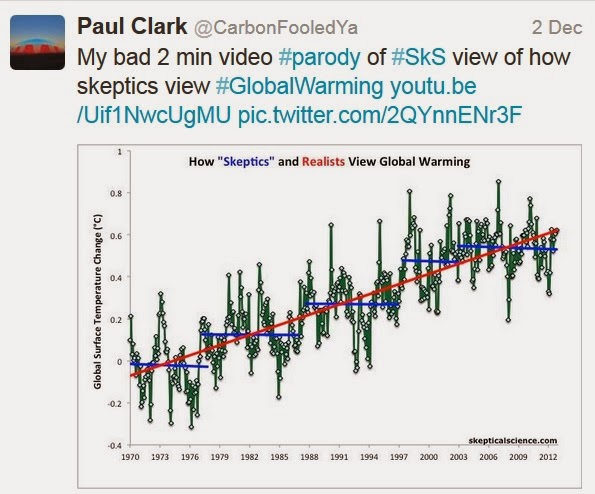 (I called it bad as in lousy, but people loved it!)
Read more »
Posted by Paul Clark at 19:45 2 comments: Links to this post