Why ocean warming can not be caused by global warming


Recent ocean warming over the past century and a half can not be caused by alleged CO2-induced global warming for three main reasons:

1) Most of the warming occurred before the time of significant atmospheric CO2.

2) The warming occurs 100s of metres deep down – too deep for that warmth to have come from the surface – and is so disparate from ocean to ocean as to suggest local or natural causes, not a global one like AGW.

What the above suggests is that the oceans are very influential in 20th century warming rather than AGW. 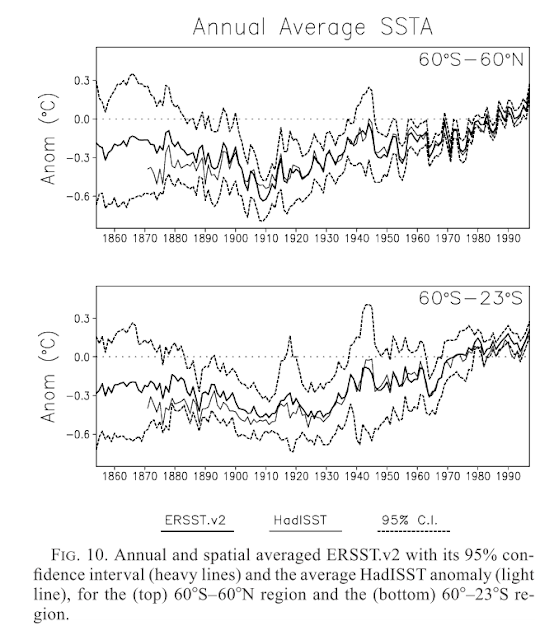 Roemmich 2012 opening paragraph says that the ARGO minus HMS Challenger deep ocean measurements concur with the sea surface measurements of Smith 2004. The Smith 2004 SSTs are therefore used as a proxy for deeper ocean warming in the 0 - 700m layer.

"The 0.33 ◦ C ± 0.14 average temperature difference from 0 to 700 m is twice the value observed globally in that depth range over the past 50 years, implying a centennial timescale for the present rate of global warming."

So from 1874 to 2010 (136 years) the warming in the 0 - 700m layer was double the rate as during the last 50 years based on both measurements made at depth and the Smith 2004 ones from the surface. Yet climate scientists conclude that as earth's atmospheric warming has slowed the last couple of decades its effect on ocean warming has increased, which defies basic physics.  In fact it implies that oceans are doing the warming to the air not the other way round.

Sea surface temperatures (SSTs) can be used as a proxy for deeper temperatures because it is these deeper temperatures that cause changes in the former, not air temperature.  Roemmich 2012 states: "The implications of centennial-scale warming of the subsurface oceans extend beyond the climate system’s energy imbalance." which is climate science-speak for the warming is natural, happens over centuries and is nothing to do with AGW.

Hence SSTs reflect warming further down; recent atmospheric warming blamed on CO2 can not cause this. It takes centuries not years or decades for heat to travel down that far.

The following graph is taken from Trenberth et al 2017. See how the lower layers have the same shape of warming as the upper? How can AGW heat get down that deep that fast? Doesn't the similarity in shape imply a bottom-up trajectory for the heat or at the very least a long term top-down heat that's been going on for centuries and is therefore not AGW from the last few decades? 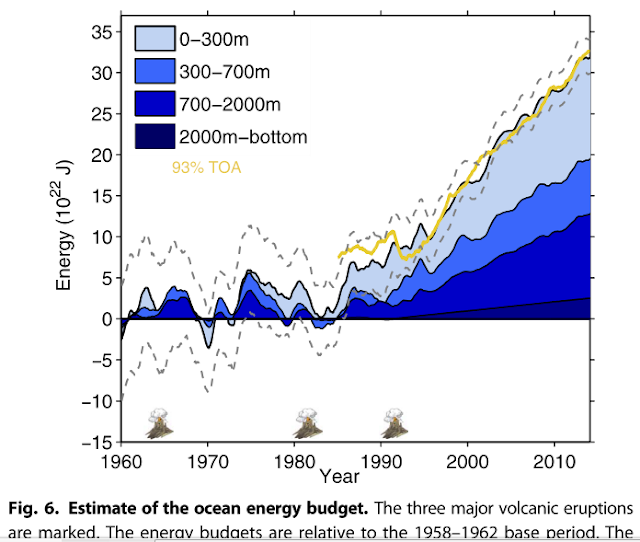 You can see plenty of ocean warming in Roemmich 2012 Fig 3 at depths surely too deep for AGW to be responsible right down to 1,800 metres and beyond: 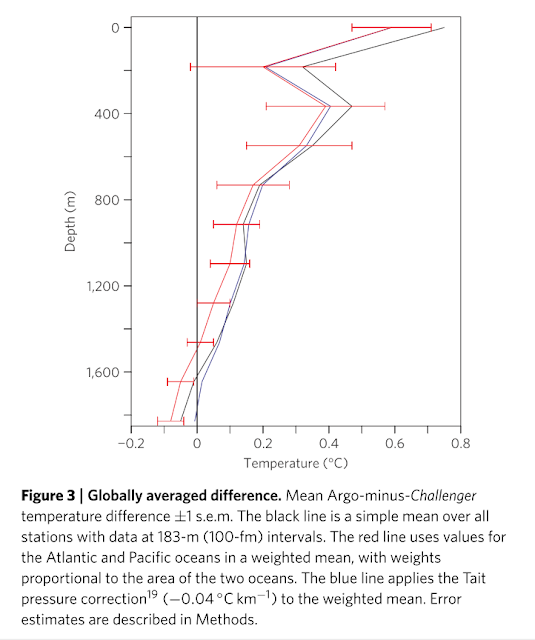 From Roemmich 2012: "..SST is important in determining air–sea exchanges of heat and increasing SST is linked to increasing rates of evaporation, and hence precipitation, in the global hydrological cycle 28,29 ." Compare SSTs to HadCru lower air temperature and you'll see they're in lock step.

The ocean has 1000 times as much heat content as the air and largely controls it's temperature (aside from the sun). It's insane to say that air temps control water temps and not the other way around. The red line is global air temperature anomaly (C) and green line is SST: 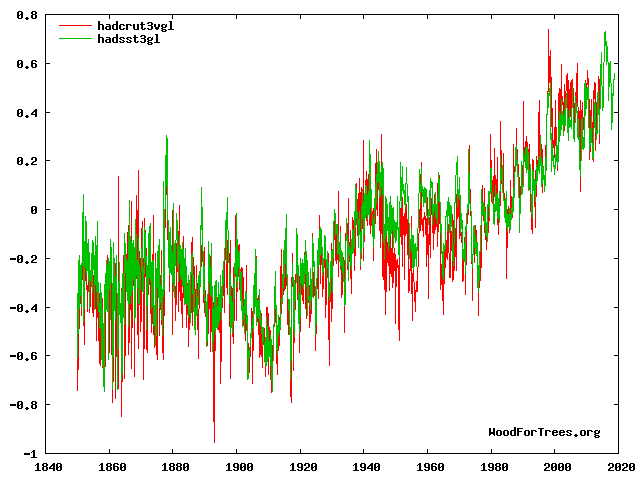 Defining a time when atmospheric CO2 is said to be significant in its effect is somewhat subjective. A casual observation of the Keeling Curve shows that at 1958 the CO2 was 315ppm, barely above the 280ppm of pre-industrial – a 12.5% increase. Today's CO2 is 408.5ppm – a 46% increase. Even a 46% increase hasn't done much if anything in the way of warming. Warmists would say that even a 12.5% increase does massive disruption. 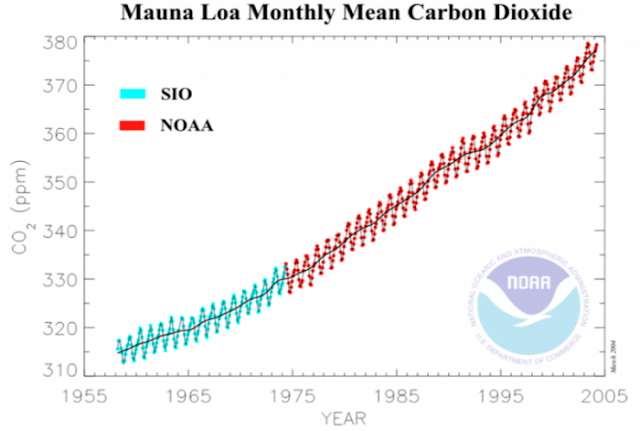 A more realistic timeline, even assuming a generous value for climate sensitivity of say 6C, was defined by the late climate scientist Stephen Schneider who said: "I strongly suspect that by the year 2000 increasing numbers of people will point to the 1980s as the time the global warming signal emerged from the natural background of climatic noise." 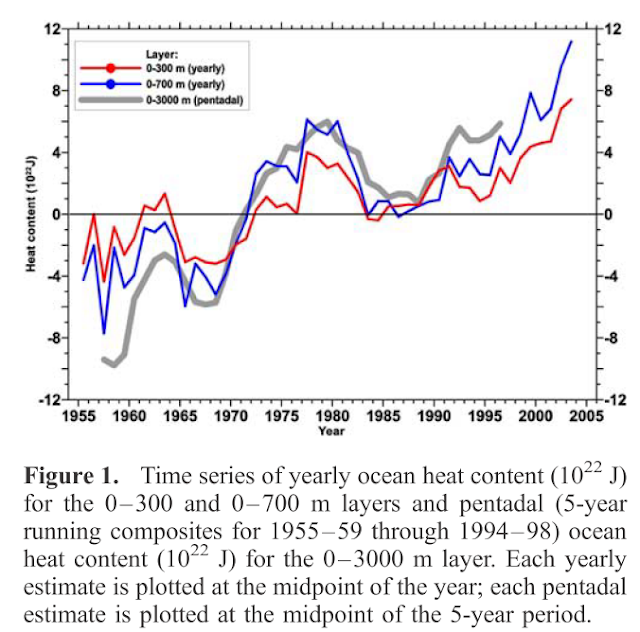 Another telling sign that this ocean warming is natural and not AGW-induced is how different spatially it is.  You'd have to be pretty dumb to believe this warming is from the one global phenomenon when it's so disparate geographically.

This graph of ocean warming in the 0-700m layer of different basins from Levitus 2009 is mind-blowing: 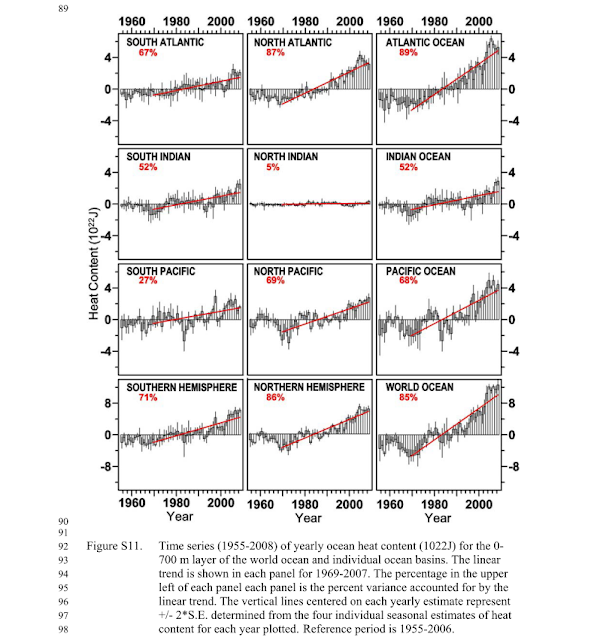 How can the alleged global cause of this warming have virtually zero effect in the North Indian ocean? I can hear the warmists' excuse now: "CO2 warming will have different effects in different places" ..which is hardly a convincing argument. In fact if all these changes are from the uniformly distributed CO2 we should expect a uniformity of effect as a chief characteristic of such changes but we don't.

The north Atlantic is roughly the same size as the southern and yet gained more than twice as much heat content according to the above graph in Levitus 2009. How can that be due to AGW? This ocean warming likely explains why there has been so much warming in the global temperature record (e.g. HadCru) given the large number of weather stations on either side of the north Atlantic.

The northern hemisphere ocean is also warming more than the southern according to the above graph.  Notice that this hemispherical difference is reflected in the air temperature time series of HadCru: 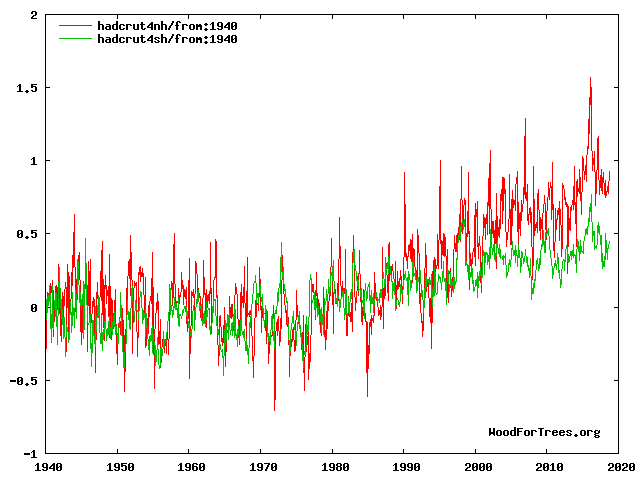 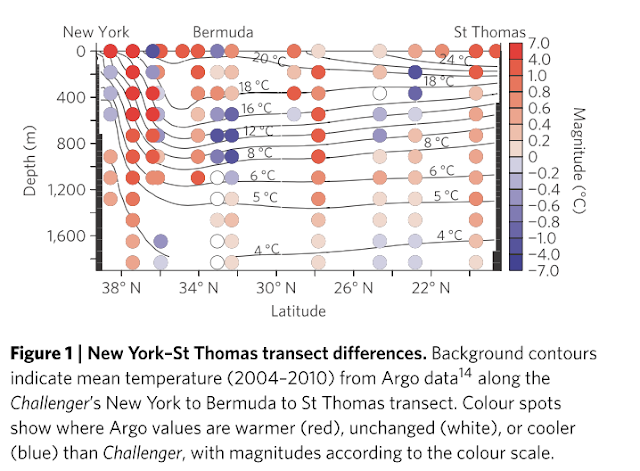 On a volume-for-volume basis the difference in heat capacities between air and sea water are roughly 3,355 times.  An energy difference causing a 7C difference in sea water'd create a 7*3,355 = 23,400 C temperature difference in the air of equal volume. AGW can't do this kind of energy change to sea water, especially at 1,600 metres depth. 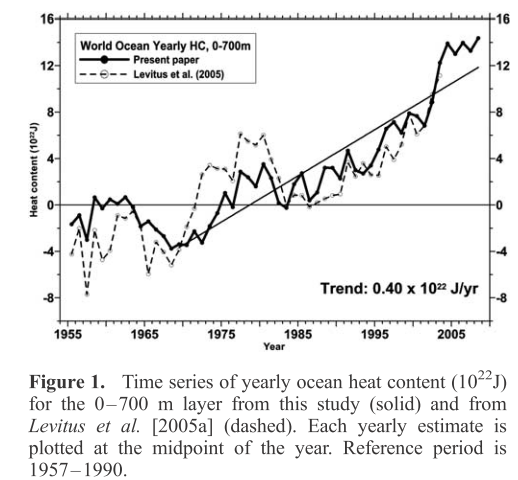 According to the HadCrut4 global temperature average, the world warmed about 0.68C during this time. 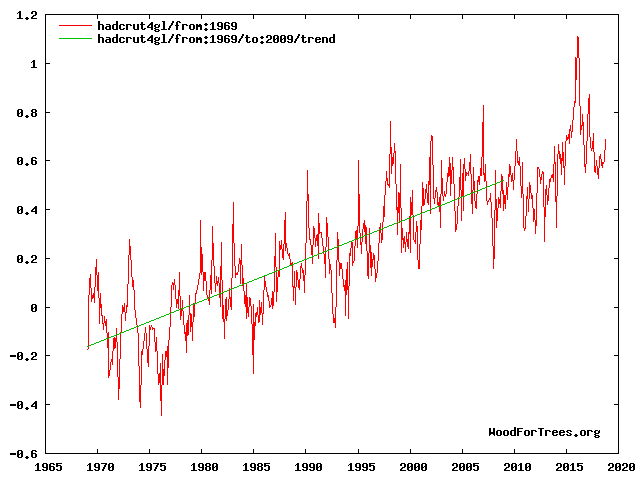 Mass of atmosphere is 5.1480 * 10^18 k. Troposphere is 80% of this mass which is where the greenhouse effect is said to take place but I'll use the whole figure to keep it simple.  Heat capacity of air = 1005 J/(kg*K). For every degree Celsius the atmosphere warms you get an energy increase of:

There's 45 times as much warming in the 0 - 700m ocean than in the atmosphere in energy terms. If all of that heat stayed in the atmosphere it'd cause about 45C of warming.  Of course if that 45C of warming actually did stay on the surface it'd merely radiate away to space which is exactly what would happen to virtually all AGW heat. What climate devotees expect you to believe is that human-made heat actually prefers to go downward toward the warmer ocean than upward toward space, the latter with an average background temperature of 3K.

Climate scientists think that earth average temperature can increase by about 0.6C up to the year 1998 or so, then in a step-function stop the air warming and magically input all of it into the ocean. And furthermore that the speed of heat input into the ocean increases the warmer the ocean gets.  What a misunderstanding of basic physics that is.

How much of the ocean warming is human-made and how much is natural? The correct answer is that 100% of it is natural.  But climate scientists have a pre-determined conclusion to work toward and the warming predicted by climate models has failed to materialise, so they make a completely unsubstantiated claim that 90% of the warming goes in the ocean (1, 2).

@cbfool The best explanations currently offered suggest that temps are rising if you take heat stored in the oceans into account.
— Manjana Milkoreit (@ManjanaM) September 9, 2014

This defies the fact that the warmer the ocean gets the less likely it is to absorb heat from the atmosphere. Hence AGW is really missing in action – the theory already a failure.

If we take a very generous estimate for climate sensitivity of atmospheric warming of 6C for a doubling of CO2 – 2C from CO2 and the magical 3x multiploctaion of water-vapour feedback – you still can't arrive at the insane claim that 90% of the surface warming goes in the ocean.  If that 90% of warming stayed on the surface it'd produce ~10C of warming (again it would actually just be radiated into space).

6C is very generous for a climate sensitivity estimate and they have been falling with time. I believe the estimate is close to zero but even consensus science has been forced to humble their contrived "forcing" mechanism with time. 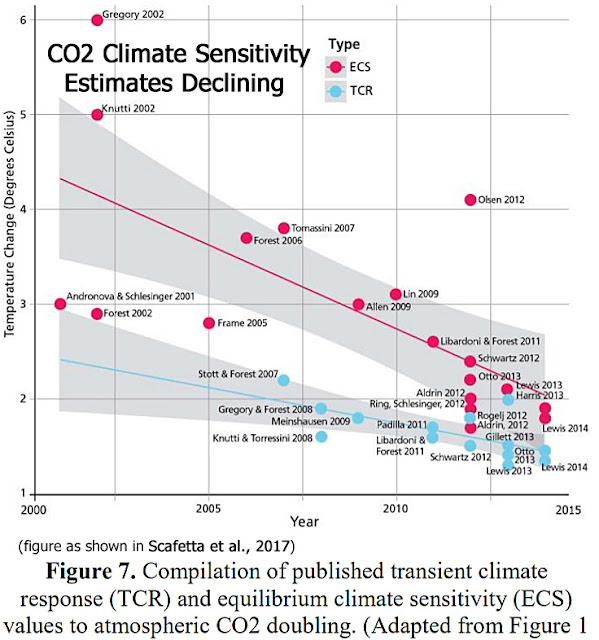 So basically to climate devotees CO2 is some kind of magical energy factory that can produce 0.6C of warming in the air and generate 10 times as much warming in the ocean.  This despite the fact that CO2 has no energy source to keep providing this energy. And further they claim the warmer the ocean gets the more likely heat will travel from the air downward into it rather than outward to space.

Climate scientists say that CO2 caused about 10 times of the 45 times heat increase of the 0 - 700m ocean compared to air. That's about one-fifth.  How do climate scientists arrive at this one-fifth figure? Answer: they just picked a number at random and went with it. That's how much these people lie.

The change in the graph of ocean heat content 0 - 700m from Levitus 2005 to Levitus 2009 does have one of those suspicious type of adjustments that suppresses earlier values of warming and increases later ones. But even taking that at face value...how in the world of thermodynamics does a slowing air temp rise cause an increasing ocean temp rise?  CO2 can not direct heat towards warming objects like this.

Ocean warming has been going on for 1000s of years since the last ice age. Since the last major glaciers melted about 6,000 years ago most sea level rise is thought to be due to thermal expansion.  The rate of this sea level rise hasn't increased during the time of rising CO2.  Nevertheless the Smithsonian Institute explains how you can stop the oceans from warming by reducing your carbon footprint (!):

But as we can see quite clearly in this present blog post the oceanic warming is nothing to do with humans.  The ocean warming comes partly from increased sunlight hitting the ocean surface due to decreased cloud cover.


There'd be somewhat of a top-down trajectory for heat from that. As well as a very modest millennial scale warming from the warming of earth air temperature at the cessation of the last ice age that also takes a downward trajectory.

But I believe that there's significant undersea heat that takes a bottom-up trajectory from geothermal sources that are not yet recognised by conventional science.  Combine ocean warming with sun activity and you have your explanation for global warming.