Boy how I regret installing the disqus comments plugin

I thought I'd be clever and install Disqus comments plugin on my blog, replacing the native blogger system. But it was a mistake for two reasons:

Firstly, there is a technical glitch that arose about 8 months ago due to to some issue with blogger going from an http to https address. This split my comments into two separate streams. You can still see all of the older comments on the disqus site but they don't properly appear on this blog anymore. I don't have the time or desire to learn how to resolve this issue.

Secondly, disqus can no longer be considered a neutral, open platform since about two weeks ago they pulled the plug on Alex Jones's Infowars site [1,2] and abandoned him abruptly and deleted thousands of his users comments.  This kind of political editorialising & censorship is unacceptable. 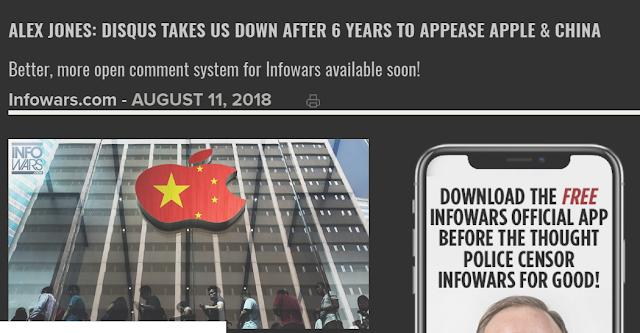 Website administrators install Disqus in good faith that it will not interfere based on ideology but only on neutrally applied legal terms of service violations etc. This political interference has ruined Disqus's brand in my opinion; they can no longer be trusted.

Left wing people do not understand or they don't care the damage they do to their company's reputation or profitability when politics trumps open, neutral business policy and governance. To a leftist politics is religion and is therefore paramount on all of life's dealings and activities -- such is the mental disorder of liberalism.

I'd like to uninstall Disqus and have the comments automatically be retained but Disqus says there is no synching with blogger. Gee thanks a lot. You guys at disqus have really left me high and dry now. It was a big mistake for me to outsource commenting in this way.

I will now have to manually put up all these comments again and go back to the blogger comments system. What a waste of time.
Posted by Paul Clark at 13:49