The real significance of the latest climate scare on soil

The real significance is that not all the carbon dioxide rise comes from the burning of fossil fuels. Hence taking action to reduce earth's percentage of carbon dioxide by stopping fossil fuels burning are even more futile. But to the doh-dohs who don't understand cost-benefit-analysis who promote climate change it means climey change is even more scary and.....yup: worse than we thought. Oh noes! 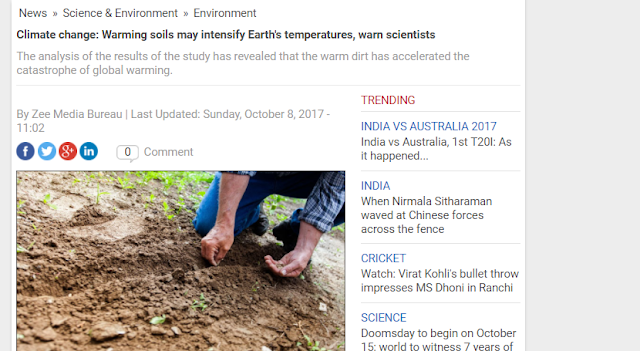 Deforestation has the same isotopic fingerprint as fossil fuel burning and is responsible for up 30% of the CO2 rise according to UN FAO.  And in my opinion could contribute more. Plus, the possibility of ocean outgassing.

A few posts from the Tallbloke's Talkshop relevant to this:

If true, all these possibilities mean that action is even more futile and stupid.

Here they are at a protest to stop poor Indians getting coal-fired electricity. The allegedly morally superior people who've never had an empty stomach in their lives and charge their mobile phone without a 2nd thought are in fact hideous ghouls. But of course being lefties they lack the introspection to see it. I mean if you weren't stupid you wouldn't be a leftie.