The labels were switched on graph 1a. So I switched them back to correct them. You can verify that the graph is now correct considering the difference graph figure 1b: 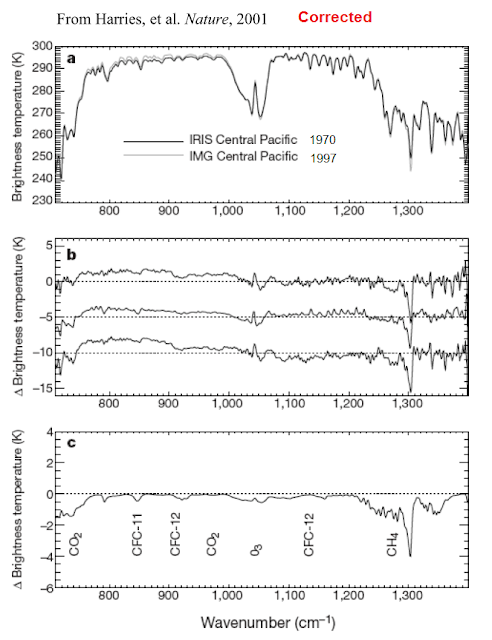 The previous page shows graphs of brightness temperature as a function of wavenumber measured from instruments on satellites in 1970 (IRIS – Infrared Interferometric Spectrometer) and 1997 (IMG – Interferometric Monitor of Greenhouse Gases). What is shown is brightness temperature – the temperature of a blackbody that would emit the intensity of radiation observed at the frequency of interest, which uses the Planck function. This brightness temperature (or emission temperature) is plotted as a function of wavenumber in cm-1. Wavenumber is the number of cycles per unit of length, and here length is measured in cm. The 15 micrometer vibration-rotation lines of carbon dioxide would appear a little off the left of the plot at 666.7 cm-1. The 9.6 µm band of ozone appears at about 1042 cm-1. Methane absorption occurs around 1300 cm-1, which corresponds to a wavelength of about 7/7µm.

The bottom panel shows the difference of 1997 minus 1970. In most places the difference is small, but in some wavenumber intervals the 1997 brightness temperatures are significantly less in 1997. This reflects the increase in the concentrations of gases such as CO2, CFC and CH4 between 1970 and 1997. The optical depth depends on the density of the absorber. If the amount (density, mixing ratio) of absorber increases, the optical depth at the wavelengths of absorption increases, the emission that escapes comes from higher in the atmosphere, where the density is lower and the temperature is lower, and so the brightness temperature is less. Thus we see the greenhouse gases increases reflected in the emission spectrum of longwave radiation.