Why Tyndall's experiment does not prove the greenhouse effect

It was the result of several months work on his part. But in fact Tyndall's experiment shows nothing more than that EMR from a warmer object is absorbed by a colder one. Such absorption is not proof of a greenhouse effect.

In order for Tyndall's experiment to prove the greenhouse effect it would have been necessary to measure a gain in overall heat in the objects of the experiment, particularly in the emitting and absorbing objects.  But this did not happen in the experiment, could not have happened, and was not even attempted to be measured. 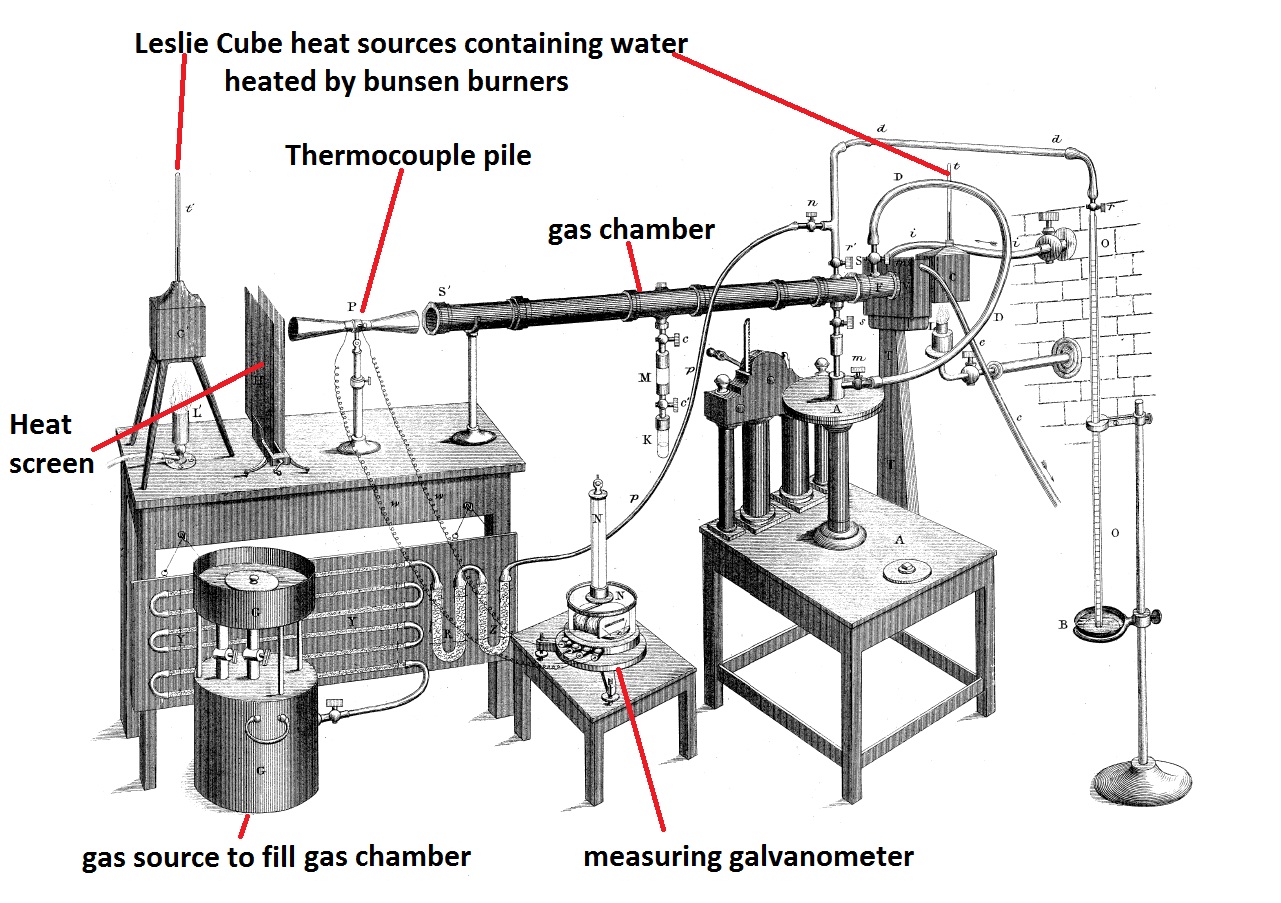 Tyndall's experiment
There was a thermometer in each Leslie Cube heat source as shown by the black vertical line marked t t' in the diagram below.  But these thermometers were concerned with making sure the Leslie Cubes were at the required 100C boiling point of water, not with measuring greenhouse effect warming. Their resolution was too low to measure any such warming in any case.
If the gas target tube wasn't cooled then the target gas in it would have warmed until it emitted as much EMR as it absorbed.  Then once again the needle in Tyndall's galvanometer wouldn't deflect, and greenhouse believers wouldn't be able to erroneously claim that the greenhouse effect was being proven in this experiment.
But the tube is cooled in this experiment by a water cooling system marked "V" in the diagram below. 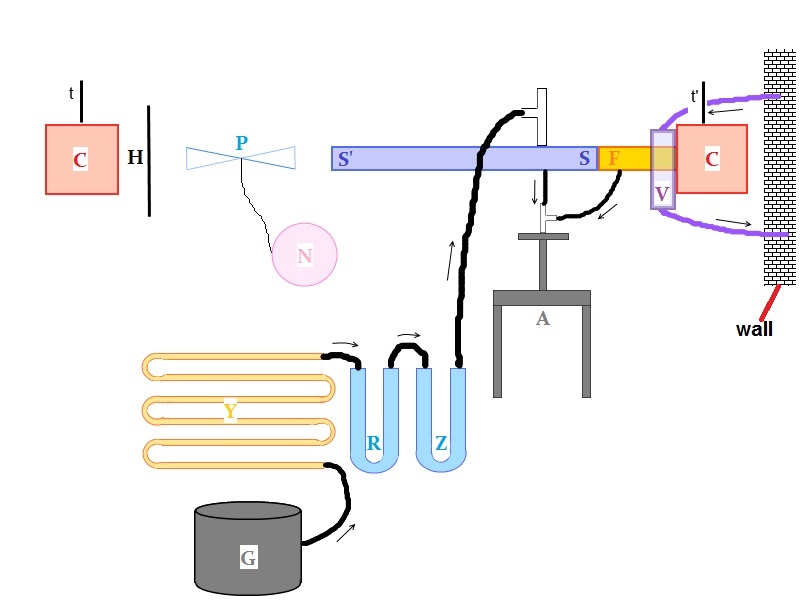 My breakdown of Tyndall experiment
And even if the gas target tube wasn't cooled by water, the air in the laboratory would cool the tube, and the walls of the tube would cool the gas in it. Therefore the absorbing gas target can never emit as much EMR as it absorbs.
And that's all that the Tyndall experiment shows: that EMR is absorbed in a cooler object from a warmer one.
The fact that CO2 absorbs more EMR at infrared frequencies than oxygen or nitrogen under these conditions is of no consequence as to whether energy can be generated by such a process -- it can't.

Whether it's more or less absorption, there is no such thing as a "blanket for EMR" than can generate extra energy. Likewise backradiation can produce no such extra energy.


The analogy is entirely false that an atmosphere with molecules free to move in it can in any way act like a blanket or the glass top of a greenhouse -- these work by blocking convection.
And if the target gas was to warm through absorption, the amount of energy gained would be perfectly matched by the amount of energy lost from the Leslie Cube heat source. How could it be any other way?

A modern depiction of Tyndall's experiment can be seen in the BBC's depiction of the greenhouse effect in the video below. 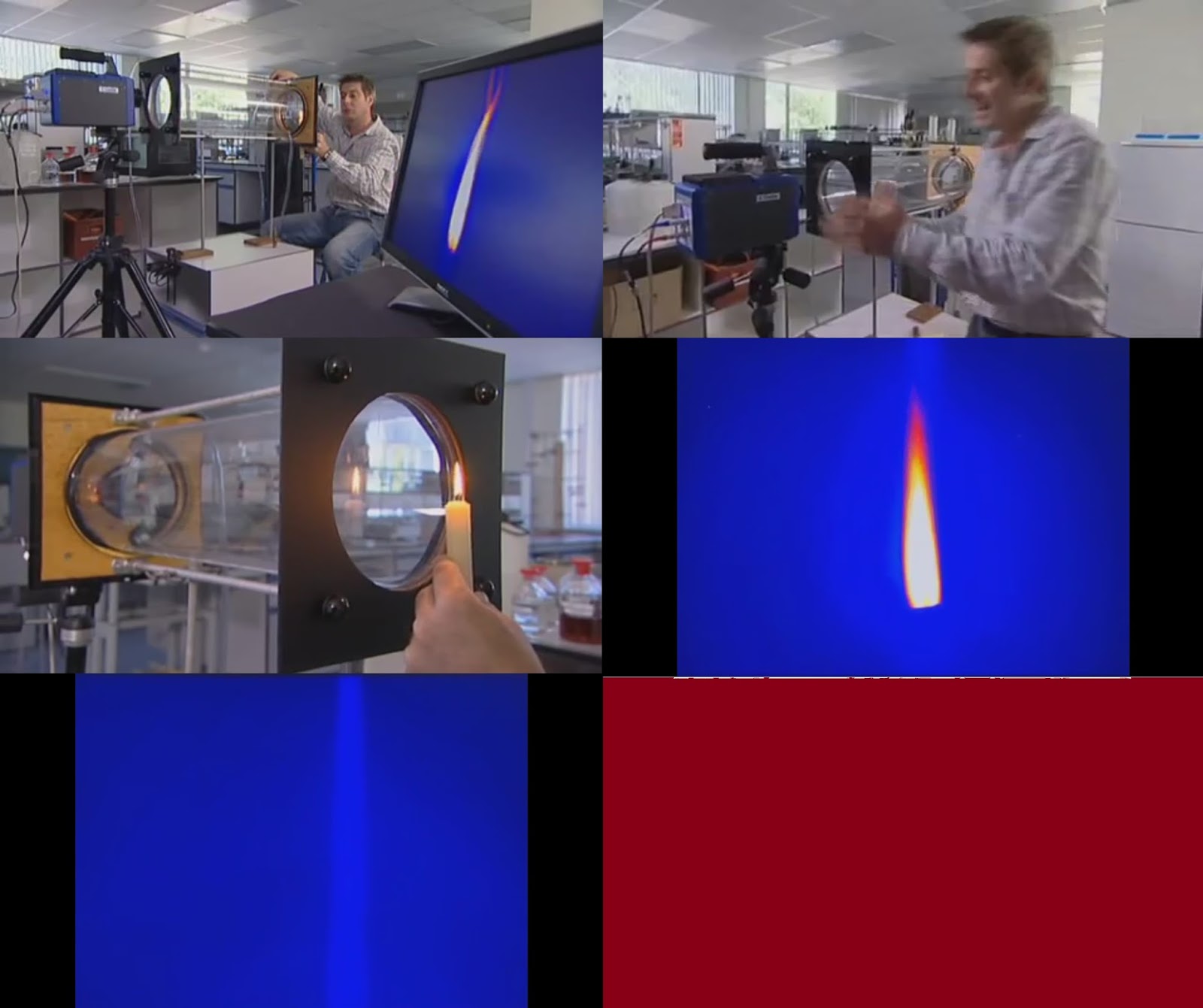 A few screen shots from above BBC video. The candle flame appearing on the infrared camera is snuffed out after CO2 is introduced into the tube.


The absorption experiment depicted above merely shows that IR is converted into thermal heat (of molecular motions) and this is distributed around the lab.  This is not evidence of free energy warming via greenhouse effect.
In the end none of these absorption experiments, such as Tyndall's and similar, are anything more than experiments showing scattering of IR to thermal heat. There is no energy production and no greenhouse-style warming. 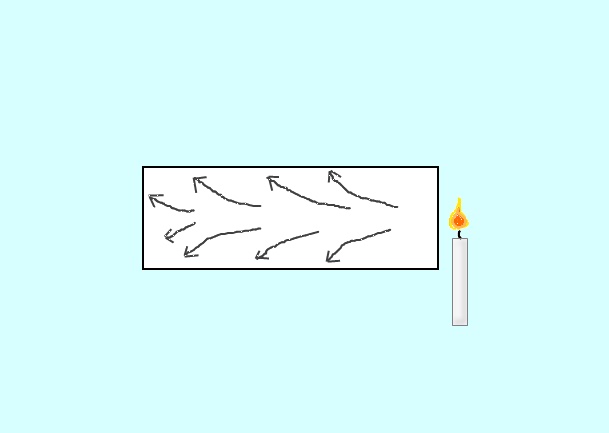 How is IR scattering proof of the greenhouse effect? This just distributes energy from one direction to another; you can not derive energy from such a process.


If an object is warmer it has more energy. This is a basic observation that should be obvious to anyone familiar with intermediate physics. Greenhouse gas can not create the necessary extra energy to produce the putative 33C warming. Yet this basic fact is apparently forgotten when AGW believers, and many skeptics, consider the greenhouse effect.
Science fiction writer David Appell seemed stunned when I recounted this basic fact (in comments here). He said: do you really think all the world's scientists would have overlooked this basic fact, that they could get this simple thing so wrong?
Yes David a pile of climate text books discussing the greenhouse effect does not make it one bit truer as much as your wishful thinking would like it to be.

Most of the world's scientists are too limited in their thinking on this issue, or they are compromised by the need to toe the line of the academic establishment (e.g. for job security and promotion) to say otherwise.
David Appell says energy isn't created for free in the greenhouse effect. Oh yeah well then why do alarmists the world over speak of how there is more energy for storms, hurricanes and the like?

Extra heat in the atmosphere or ocean nourishes storms; the more heat energy that goes in, the more vigorously a weather system can churn.
From SkepticalScience:

But we do know there is extra energy in the system now, so could it have any other effects on tropical storms?


There are only two ways to increase an object's temperature (in a vacuum): 1) to increase the energy (heat) content, and 2) to decrease the emissivity.  This is summarised in the Stefan Boltzmann equation:

Where omega is Stefan Boltzmann constant = 5.67 x 10-8 W m-2 K-4; T is temperature; epsilon is emissivity from 0 to 1; and EMR is radiative output power. Notice particularly that this equation does not contain a greenhouse effect component.
Now if, as greenhouse theorists claim, energy is not produced by the greenhouse effect, then in order to for earth to warm the only other way is if CO2 is reducing earth's emissivity.  But CO2, being a good absorber, is also a good emitter of EMR -- this would increase earth's emissivity.
The world's most powerful infrared lasers utilise this enhanced emission by having CO2 in the emitter. 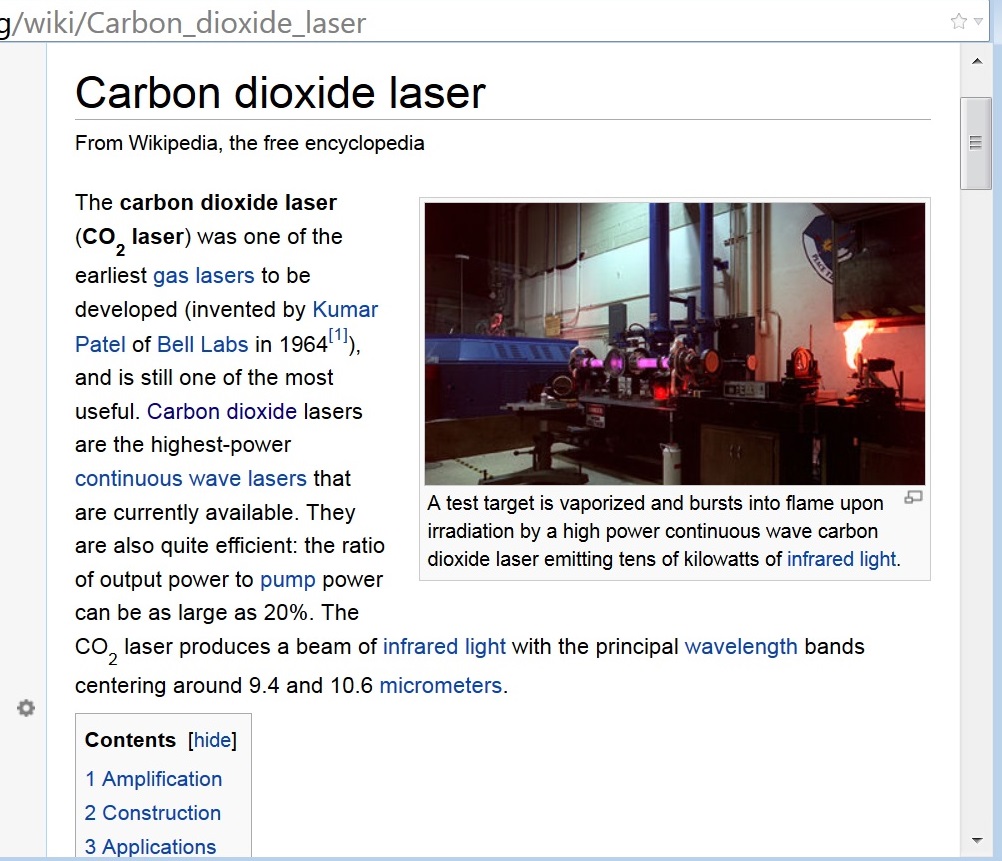 And some suggest that CO2's increased emissivity can cool the earth. (example)  So CO2 neither traps energy as EMR, nor reduces earth's emissivity. It therefore can not warm the earth.


The experiment to prove the greenhouse effect


A more viable experiment to prove the greenhouse effect would have to be done in a vacuum chamber so as to eliminate the effects of air convection.

Let's take a sphere that is evacuated of all air. This will be the experimental chamber.  The inside and outside wall of this outer sphere and all other surfaces are painted matt black so as to mimic a black body.
Let there be a central element, a constant output wattage source such as an electric resistor. Accurate temperature measurement transducers will be placed at various points in the experimental chamber. The set up looks like this: 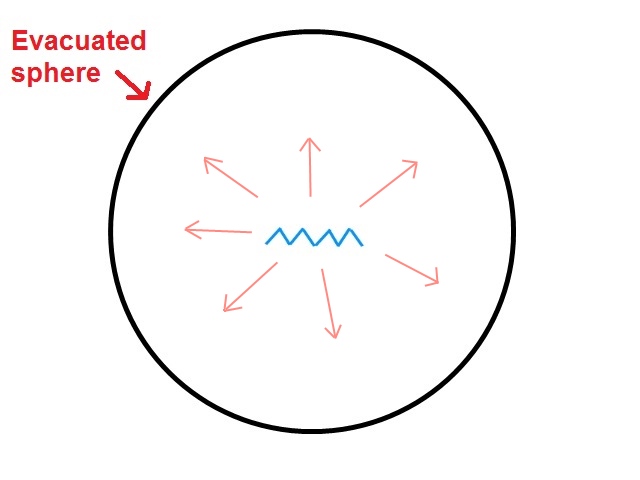 Figure 1 (a).  Simplified cross section through evacuated sphere. At first EMR proceeds unimpeded from inside to outside of the experimental sphere chamber.


In the first configuration (a) there is no shell around the central heat source and EMR flows unimpeded from the inside to the outside of the sphere. In the second instance (b) we introduce many "blankets" to the EMR: concentric spherical shells arranged like the layers of a onion. 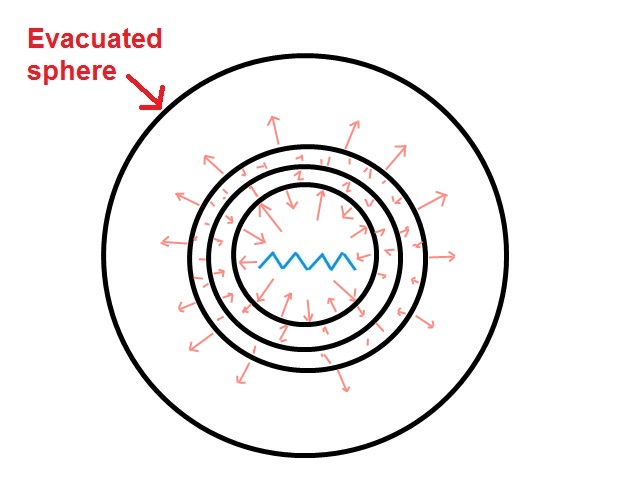 Though EMR may be blocked optically, it continues on its merry way in an energy sense. Each newly introduced shell will take a little while to warm -- this is a "slow down" in a sense -- but is a temporary effect, and each shell will eventually emit as much to the outside as it receives from the inside. Each layer will heat until it emits as much out from the outer surface as if there was no layer at all.

And yet despite all the extra "backradiation" none of it has any warming effect. For this is the nature of EMR: all mutually exchanged EMR cancels, it does not add as greenhouse effect theory requires.
The amount emitted backward toward the emanating heat source equals the amount being absorbed. And yet there is no excess warming of the inner elements by all of the backradiation.
How can this be? Surely all of this extra backradiation reverberating everywhere must have some warming effect. In fact no: such mutual EMR reverberation is happening everywhere all the time, even on the inside of objects.  This experiment is just a cross section of this everyday normal event of mutually exchanged EMR by particles of matter.  None of it generates any extra energy at all!

Because each shell is emitting as much as it is absorbing, because it is not changing temperature at all, as per Kirchhoff's law and the Poynting Vector, no energy is gained, despite all this backradiation.
No matter how many layers of EMR absorbing/emitting/reflecting material none of the backradiation will have any warming effect. And every photon that is absorbed by these layers, just as in earth's greenhouse gas layer, is cancelled by a photon that is emitted by it -- no overall warming.


Some say emergency Al foil blankets are a blanket against EMR.  But they work by reducing the emissivity on the outside of it, not by trapping EMR.

[1] John Tyndall, the Bakerian Lecture: On the Absorption and Radiation of Heat by Gases and Vapours, and on the Physical Connexion of Radiation, Absorption, and Conduction. -- Philosophical Transactions of the Royal Society of London, Vol. 151 (1861), pp. 1-36. (Another link)