At subsonic speed, below Mach 0.3, the pressure of the air coming into the hull of an aircraft is roughly 1/2ρv2 where ρ is the density of the fluid medium; for air at sea level = 1.225 kg/m3.  The equation for compressible flow given for above Mach 1 speeds goes as the power of 3.5 rather than 2 and rises much more quickly. 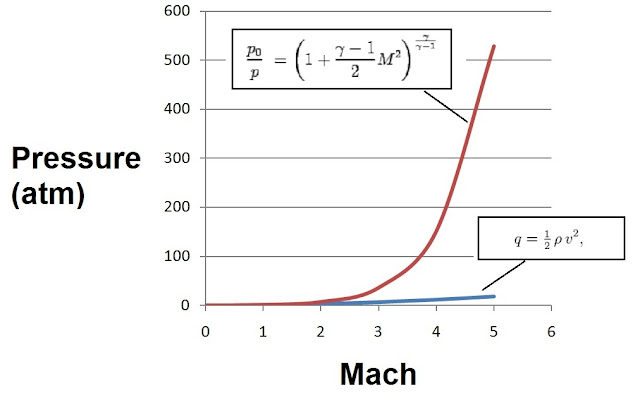 Comparing pressure in compressible (red line) and incompressible (blue line) Mach regimes.  Greater than Mach 1 (red line) has much more pressure (no adjustment for density) than equation for below Mach 0.3 (blue line)(Gamma = 1.4). (My excel worksheet here.)

To be conservative I have used the subsonic speed 1/2 ρv2 estimate in which case the pressure at 11,000 km/s at 10km altitude with air density 0.26 kg/m3 (where most of the capsule slowing takes place) would be 155 atmospheres: 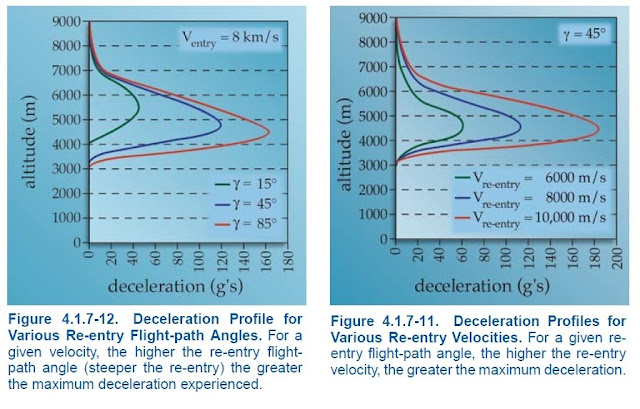 This is equivalent to the weight of more than 4 fully loaded 747s: 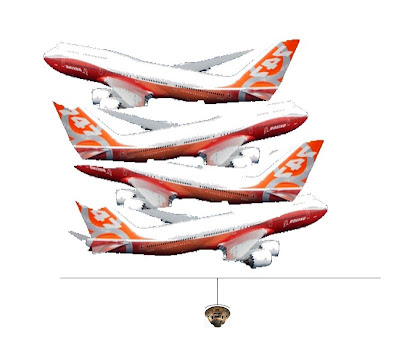 Against this awesome force a relatively flimsy inner and outer hull is provided.  From Apollo Saturn:

COMMAND MODULE
The basic command module structure consists of a non-pressurized outer shell (the heat shield) and a pressure-tight inner shell for the crew compartment. The inner compartment is formed of aluminium honeycomb sandwich while the heat shield is formed of stainless steel honeycomb sandwich. The space between the inner and outer structures is filled with a special fibrous insulation (Q felt). 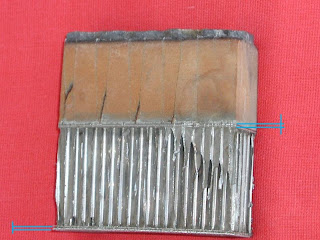 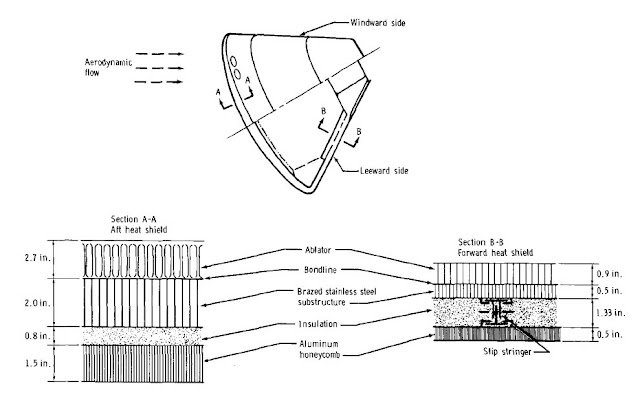 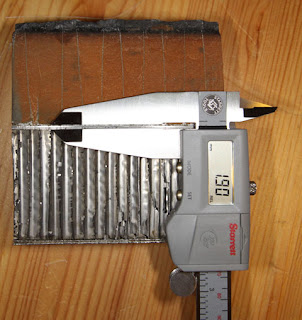 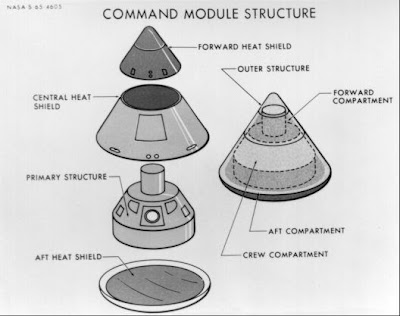 This is the aluminium inner compartment of the Apollo reentry capsule: 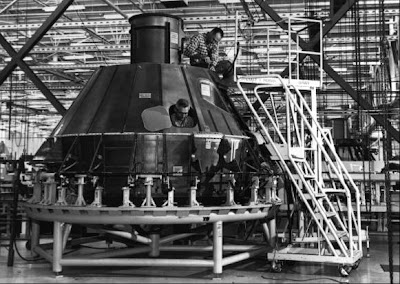 The Apollo Command Module inner structure was easily able to with stand the 1/3 atmospheric pressure it was pressurised to, not much more though.

The sides of space age reentry capsules such as the Apollo Command Module were even weaker than the base which was supposed to take the brunt of the reentry pressure; though neither were really up to the task. Like meteoroids that are crushed to pieces upon atmospheric entry, these reentry capsules would have cracked open like a walnut.

This concludes the 7-part blog series Space Reentry Vehicles.  Keep an eye out for the movie version in a couple of months, update: movies take longer than I expected, could be a few months, especially with this much material and my slow rate of production.

As a result of Manfred Arcane's astute comment (below) I am updating this post to reflect his concerns. Manfred writes:

...The two figures you present I have seen before, and am convinced are really screwy. The only way to get those altitudes for maximum deceleration is for a ballistic coefficient to be extremely high, much, much higher than for even a reentering warhead. Don't know why they made that choice in their document..


The 100's of G's shown in those two plots clearly does not correspond to manned reentry.

This is correct. I think you're referring to these kinds of diagrams following: 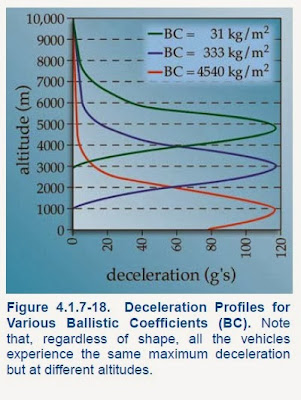 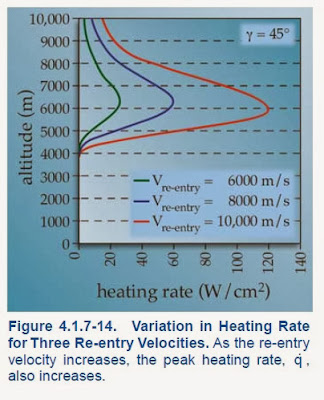 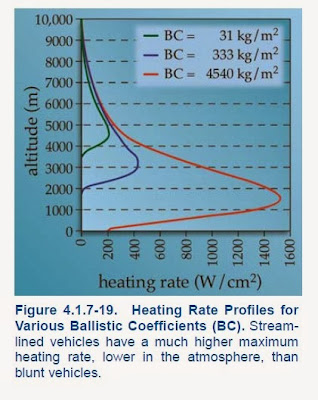 These diagrams are for non-lifting bodies. They come from the NASA document Returning From Space, which is a teaching aid and not particularly rigorous.  As the document explains these reentry profiles are used for simplification purposes, stating:

The re-entry vehicle’s size and shape help determine the ballistic
coefficient (BC) and the amount of lift it will generate. Because adding lift to the re-entry problem greatly complicates the analysis, we’ll continue to assume we’re dealing only with non-lifting vehicles. In the next section, we’ll discuss how lift affects the re-entry problem.

Now, I happen to think that the lifting, flying-wing theory for Apollo and other reentry vehicles is highly contentious. But according to theory the slow down happened well above the 10km altitude I used for the pressure in the Rho V squared equation. And Returning From Space offers these diagrams reflecting the more conventional view on the reentry profile: 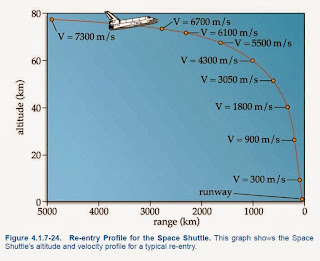 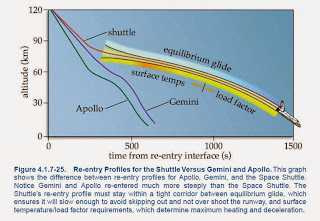 According to the above diagram there's a knee  in the curves for Apollo and Gemini at about 50 km altitude, in which case the atmosphere would be incredibly thin, as the following table shows, from equation from Engineering toolbox.
At an altitude of 45,000 metres Excel 2007 doesn't even want to calculate the pressure! But where there is drag there will also be significant pressure, no matter how thin the atmosphere.
Manfred writes:


Hence your projection of pressure is off by three orders of magnitude. 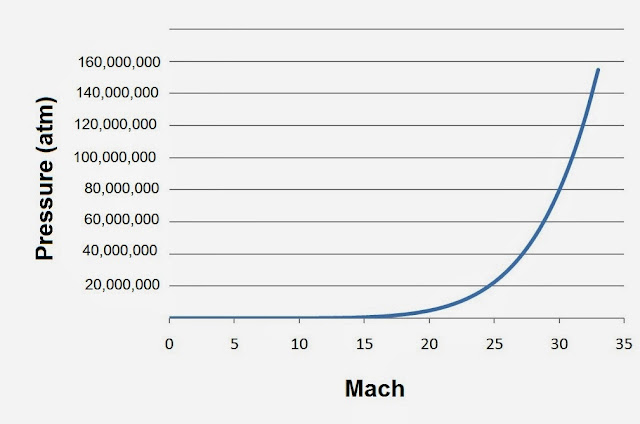 120 million atmospheres! I suggest that cancels out the three orders of magnitude you mention.  Thanks for pointing out that flaw Manfred, it improved my post.