Continuing on from part 1, here are three more points against the official story of the moon landing:
3)   Laminated photo on the surface of the moon
4)   Being picked up by suspending wire
5)   One astronaut has shadow twice as long as other


3)    Laminated photo on the surface of the moon

In my opinion this is one of the stronger points -- a real doozy for the Apollo faithful to explain away. 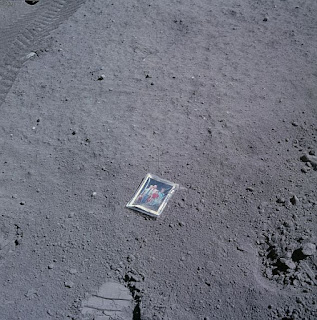 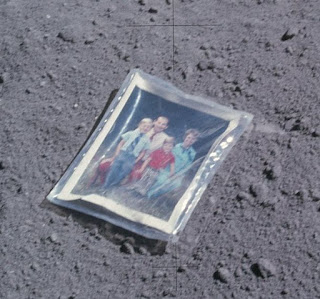 NASA online journal says: "Charlie put a picture of the Duke family - Charlie, Dotty, and sons Charles and Tom - on the surface and took several pictures of it."

According to the following graph, a sun angle of 47 degrees would make the surface temperature about 82C. 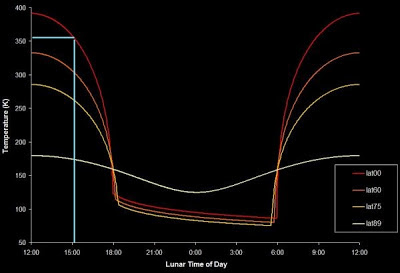 I would never put a photo, laminated or unlaminated, on a surface that was 82C (180F).

The UV from the sun would fade the photo.  The radiation from outer space and solar flares would fade it rapidly.  The heat from the surface would curl it.  And the small amount of air trapped in the lamination would expand in the vacuum of the moon until it popped.

4)    Being picked up by suspending wire

Go to about 2:10 in this video: http://www.youtube.com/watch?v=wdMvQTNLaUE 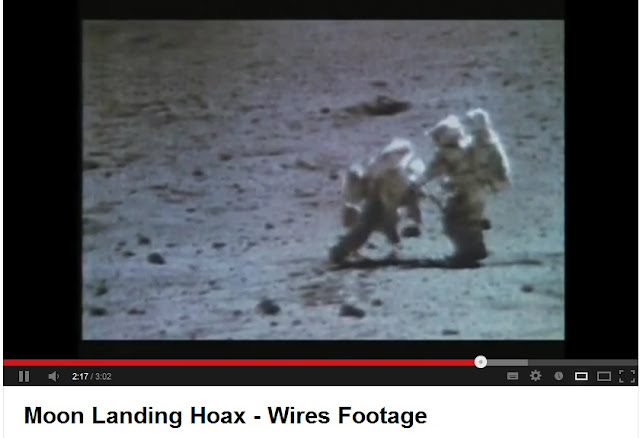 Clearly assistance is being rendered from above, and I don't mean God.

5)    One astronaut has shadow twice as long as other

Aldrin sets up the flag with Armstrong during Apollo 11: 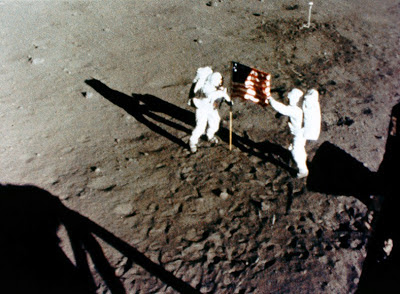 It could be the curvature of the ground slightly curtailing the shadow of Armstrong on the left, but looks to me as though Aldrin's shadow is almost twice as long as Armstrong's.

The sun should cast parallel shadows.  This scene appears lit by a much closer light.  And there was supposed to be no artificial lighting on the moon.
Posted by Carbon Con at 11:42