The Fallacy of the Greenhouse Effect 4

(Index)
In this part I rebut English/Irish physicist John Tyndall's claim to an atmospheric greenhouse effect.

In 1861 Tyndall presented a quantification of the EMR absorption of various gases in a lecture to the Royal Society of London [1].  Depicted in Fig 1 is a rig he worked on for several weeks. 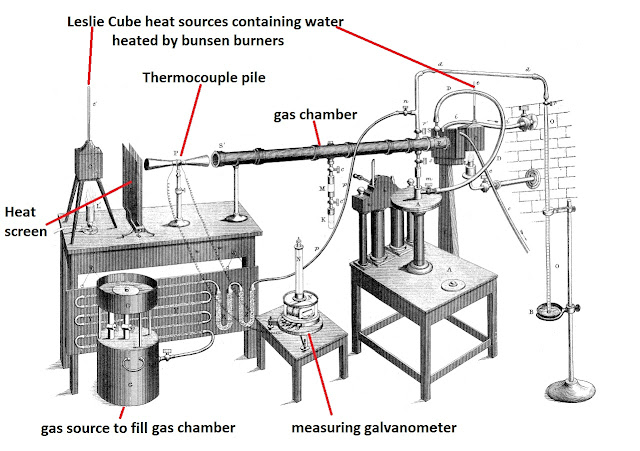 He found that gases such as carbon dioxide and ethene (similar to methane) absorbed more infrared than gases such as oxygen and nitrogen.  But this state is only made possible because the gas under examination is kept cooler than the heat source.

While EMR is exchanged two ways between heat source and gas target, in an energy sense heat only flows one way "down the energy hill" from warmer to cooler.  This heat is then removed mechanically by the water cooling system. The atmosphere has nothing like this cooling system and so Tyndall's experiment is useless as a model for it. 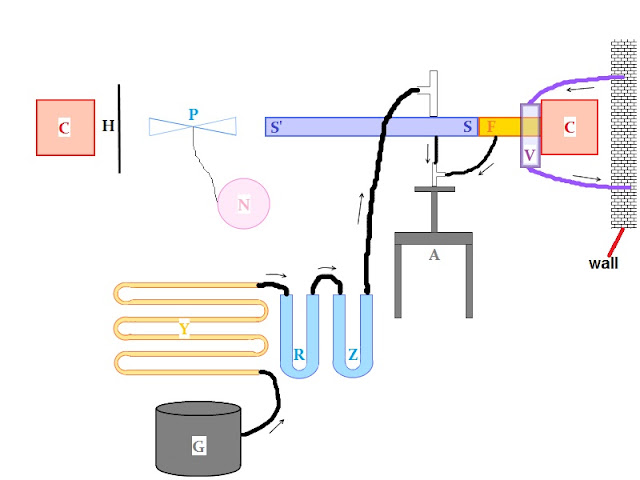 Figure 2: Breakdown of the Tyndall experiment.  Note particularly the gas target tube is water cooled -- like today's water cooled CPUs -- and therefore has no bearing on earth's actual atmosphere.  The experiment therefore does not prove the existence of an atmospheric greenhouse effect.

Thermally, the atmosphere is considered to be one entity with no heat sources or sinks aside from its contact with earth's surface, sunlight and the latter's subsequent re-radiation back into outer space.

By conventional theory the top layers of the atmosphere are considered to be cooler than the bottom layers not because there is a heat sink in upper layers but because gravitational energy is exchanged for heat energy with increasing altitude.

Any energy trapped by carbon dioxide would accumulate and result in a hotspot like this:

But a hotspot is not to be found (as discussed elsewhere like here or here).

Only the warmer ground below can heat the cooler air above with EMR, because the ground is warmer than the air.  This heat flow is one way: specifically out.  The EMR trapped in earth's atmosphere can't be recycled to do work again, and it does no extra work when it comes back down as "backradiation".

Tyndall performed the opposite experiment, of heating rather than cooling the gases, and found that gases that were good absorbers were equally good emitters.

Table 2: The emitting power of gases mimics the absorptive power [1].

That's why a substance's absorption lines coincide with their emission lines -- it all depends on the relative temperatures involved. 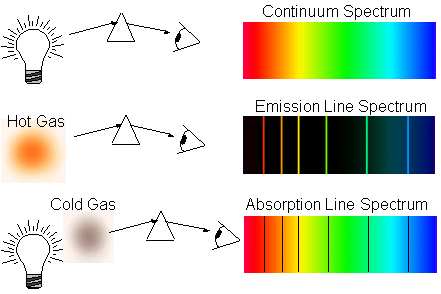 Despite Tyndall's lecture coming after publications concerning Kirchhoff's law of thermal radiation in 1860, and despite his own experience -- that good infrared absorbers are equally good emitters -- he failed to recognise how this could apply to the atmosphere's energy content as a whole.

A few decades earlier, French mathematician Joseph Fourier claimed an atmospheric greenhouse effect could exist by increasing the atmosphere's density [3].  Tyndall tried to build on this theory by saying that only a change in composition of the atmosphere is required to change the temperature, and therefore the climate, of the earth.

Earth is supposed to be, according to conventional calculations, 33C warmer than it "should" be.  If something is at a higher temperature than before, then the increase in temperature is also an increase in energy.  Yet it remains to be explained by  conventional authorities just how greenhouse gases can develop such extra energy.

In Tyndall's experiment a relevant question for the greenhouse effect is this: can the gas target emit backradiation back to the heat source making it warmer than before?

In greenhouse theory the answer to this question is yes: the cooler sky above will backradiate to the surface below and warm it to a new higher temperature.  In Tyndall's experiment if the greenhouse effect were real the heat source would get slightly hotter due to the gas tube's backradiation.

Yet, for the purpose of information, let us assume that the greenhouse effect is real and that the gas tube can warm the heat source up just a little bit.  In that case the heat source becomes warmer than it initially was and so emits EMR at a greater rate. 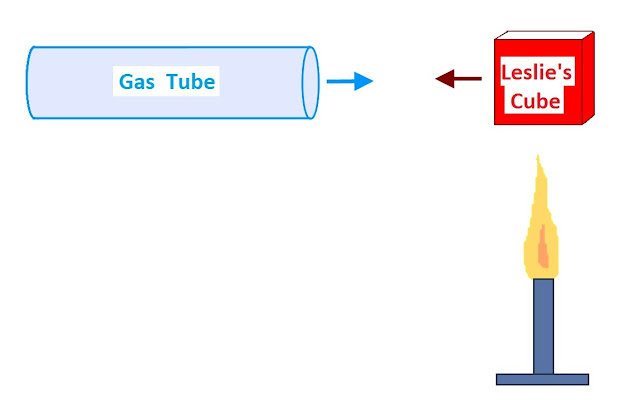 Figure 6: Ever expanding and multiplying reverberations of EMR between these two objects makes the room hotter than originally; impossible, but true according to the greenhouse effect!

In other words by putting the gas tube in the room, the room is now warmer than it otherwise would be without the gas tube.  How does the gas tube possess such an energy-creating quality?  Similarly, how can greenhouse gases provide extra heat energy in the atmosphere?  According to thermodynamics it can't.

At this point some might say that the atmosphere acts as a blanket, that it traps energy.  That only works for blocking convection, i.e. blocking the physical movement of molecules.  EMR can't be trapped in the same way -- not in an energy sense anyway, because every ray that is absorbed is countered by a re-emitted one.   Greenhouse gases don't act like a real, physical blanket which blocks convection.

Clouds block convection.  That's why cloudy nights are warmer than cloud free ones, not because they block and re-radiate heat (as EMR) back to the earth.  This entire Fallacy series is dedicated to dispelling misnomers like these.

Let's follow the reasoning of the blocking/emitting theory (example here from USA Today).  Instead of the EMR leaving earth, it gets trapped and turns into heat in the cloud.  This warms up the water droplets of the cloud.  This warmth is then imparted back to the earth to make it warmer than otherwise...and we're back to creating energy again; in other words, it is impossible -- just as impossible as creating energy for free via the greenhouse effect.

Clouds trap heat exactly like a human blanket, blocking the movement of air, stopping the warmer lower layers from convecting higher to cool by mixing especially in the vertical direction. Once the EMR leaves the ground it does not matter to the temperature of the ground whether it is subsequently absorbed on the way out or not [5].

The only effect clouds can have on EMR is to change earth's albedo by changing its emissivity.  (This may be possible, I don't know, I haven't looked into it.)

And a cloud could make the surface warmer if it got warmer than it.  But even then the effect is, in an energy sense, neutral, because the energy to make the cloud was extracted from the ground in the first place.

Water vapour also keeps the night warmer by changing the atmospheric lapse rate due to its high latent heat of evaporation.  Greenhouse gases on the other hand (other than water vapour), neither block convection nor change the adiabatic lapse rate of the air, therefore they can't block or multiply heat or energy in the air.

[1] John Tyndall, the Bakerian Lecture: On the Absorption and Radiation of Heat by Gases and Vapours, and on the Physical Connexion of Radiation, Absorption, and Conduction. -- Philosophical Transactions of the Royal Society of London, Vol. 151 (1861), pp. 1-36.

[3] The fallacy of the greenhouse effect 3.

[4] The fallacy of the greenhouse effect 2.